5 Reasons Your Phone Is Slow 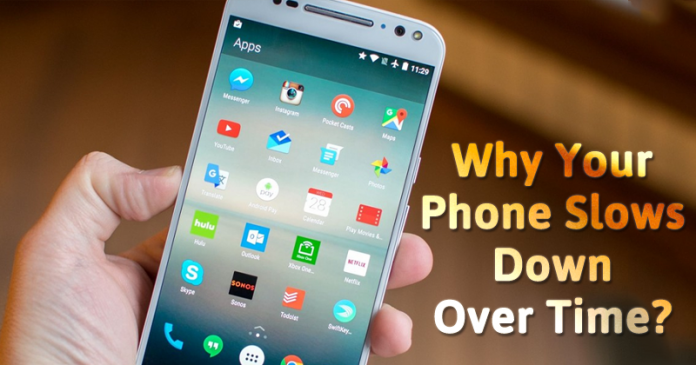 We’re used to our phones running at breakneck paces to load our favorite videos and apps. Having the internet at our beck and call means that we’re always ready for instant gratification from our phones. This is what makes it so frustrating when our phones start to slow down.

No one is ever prepared for their trusty tech to betray them, but few people know why their phone is even slowing down in the first place. Here are some of the most common reasons your phone might be acting up.

Too many apps running in the background

Background apps are downloaded applications that continue to run even when the app is not in use.

Many apps require constant updates and resources as they connect to the internet or refresh their data. This can drain your phone’s battery life and cause it to run much slower than normal. The best way to solve this problem is by deleting older apps you never use and relying on phone clean-up apps to pinpoint energy suckers in your phone.

You should also clean your phone’s cache regularly to prevent it from getting bogged down. You can perform most of these tasks in your phone’s settings. And getting a Verizon or AT&T signal booster can put less strain on apps trying to connect to the internet.

If your new phone is acting slower than usual, it’s likely because of bloatware. These apps and phone features are preset options that you never use. Even if you’ve never opened these apps, they could still be refreshing their data input, taking up useful storage space, and bogging down your phone.

Unfortunately, you might not be able to delete all of your bloatware. The best thing you can do is stop them from running in the background by disabling them in settings.

Your apps are too large

Storage space plays a huge role in the operation of your phone. If you notice your phone is acting slow, even if you transformed your photo reel into canvas photo prints and deleted their copies from your phone, other apps could still be taking up too much space. An all-in-one iPhone manager will clean up your iPhone cache in only one click.

If these vital apps are too important to delete, try investing in an SD card or other form of external storage.

It just needs an update

If none of these solutions work, your phone may simply need to update. Try turning your phone off and then on again or resetting it so that it prompts you to update your phone to the newest version of iOS or Android available.

Resetting your phone will also clear out any unnecessary data that your phone has been holding onto. But performing a factory reset should be one of your last options if you want to speed up your phone, and make sure you recently backed up your phone before you try it.

It could be the manufacturer

Just last year, both Apple and Samsung were slammed with more than $5 million in fines over slowing down the phones of their customers over time. The manufacturers were able to do so under the guise of new phone updates offered to their users, many updates of which are mandatory for the phone’s continued use.

Apple claimed to slow down its iPhones because of the degradation of the lithium battery present in the phone. They also denied that this was a marketing tactic used to encourage customers to upgrade to newer models. If you have an older iPhone or Samsung device, your phone may be acting slower because of the factory updates.