Why do the candidates fail in the IAS Exam? 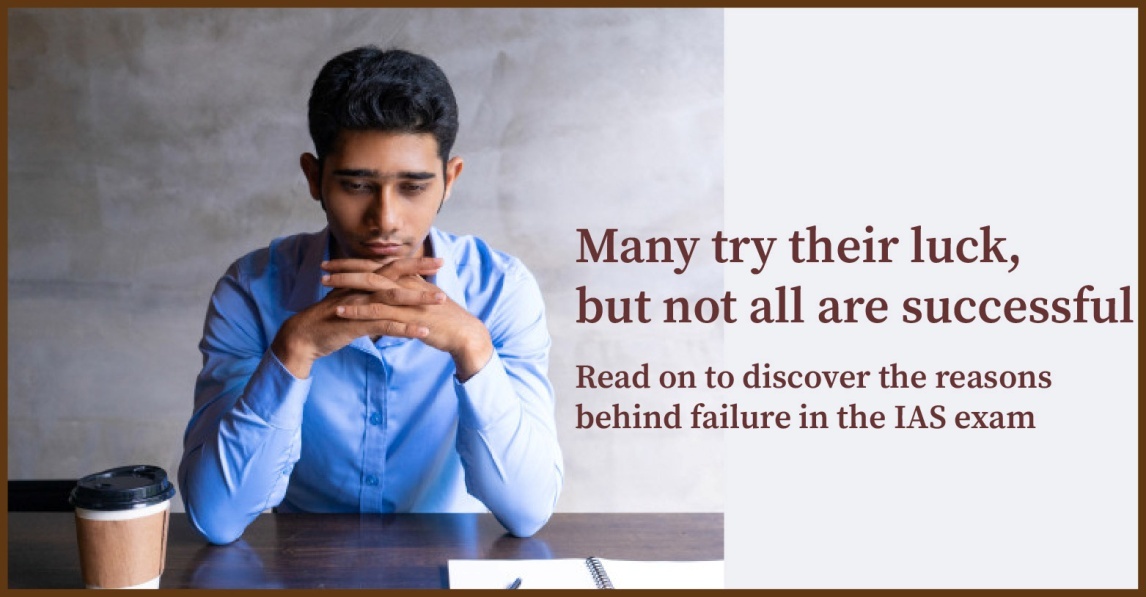 It is alarming that a huge majority of the candidates fails in the IAS exam every year. With every passing year, lakhs of the IAS aspirants appear for the exam. But only a few thousands are able to clear the Prelims. The number is reduced to a highly considerable extent when UPSC declares the results for the Mains. And you can very well guess, what is going to be the scene when UPSC declares the results for the Interview, the great Personality Test!

It can be understood without making much of the effort that it is not going to be an easy task for most of the candidates who come from all over India, stay in Delhi, pay expenses of various kinds apart from the fee for IAS coaching in Delhi and what not, only to leave the capital with a bitter taste of failure!

So, what could be the major reasons that widen the gulf between the IAS aspirants and the greatly sought after Indian Administrative Services? Quite a few of these are specified below:

However, most of the candidates do not think so in the initial stages of preparing for the IAS exam. They seem to be of the opinion that it is the Mains that should be studied for thoroughly. Doing so would help them score better and rank higher. Thus, they would be allowed by UPSC to join IAS.

However, if the candidates take the Prelims lightly, they are not going to be allowed to appear for the Mains. CSAT being the qualified exam, needs to be cleared first. Besides, there is a provision for negative marking. In case you clear the CSAT paper, only then the GS Paper I for Prelims is going to be evaluated.

So if you do not qualify CSAT, GS Paper I will not be evaluated. No prelims means no Mains for you. Thus, the entire road to success towards IAS is blocked in the initial stages itself!

It has been observed that candidate has some misconception about Essay paper. They consider that writing an essay is a natural phenomenon or it don’t need any or much preparation, and this is a wrong assumption. Essay is a game changer because it contains 250 marks, slightest carelessness can put you out of final selection. You should take help of experienced senior or join essay test series of any online or offline coaching institute. This will help you to learn art of presentation.

As already said earlier, there are two papers for the Optional subject, the choice of the same may make or mar your score when UPSC announces the results. What is worse, an inapt choice may result a failure in the exam also, again blocking the road to success towards the Interview.

So, it is best not to provide any of the details that are far from being genuine. For example, if your DAF form says that gardening is one of your hobbies, you should be having a fair share of the idea concerning gardening. Are you aware of the flowering plants that bloom in various seasons? Or do you know anything about the fertilizers or pesticides etc., that a person with keen interest in gardening should be knowing? In case, you do not, then it is best not to provide such details in the DAF form. It will not lead you anywhere, but only towards failure. Clearing all the papers successfully is no guarantee that you would join IAS unless and until, you clear the Interview also successfully.

However, the last, but not the least, only that individual can accomplish something, who believes in himself. Prepare for the exam wholeheartedly. Do not spare any effort. And move ahead with a relaxed mind. There is no scope for any kind of lack of confidence at all. However, mark it that there is no scope for any kind of overconfidence also. Many of the candidates who fail suffer from over confidence. Also, most of the failures result from the lack of confidence as well. It is best to be realistic, keep your calm and prepare well.